The work was good the price was competitive

The technician that came out was profesional and did a clean job.

Mantor is the best, he’ll be doing all my electrical work from now on- make sure you have cookies on hand he has a sweet tooth!!!

We had All Star mount our TV over the fireplace and setup an IR extender so the cable box would be hidden in the basement.  Erjon and his team did the install and I can’t say enough good things about him. He called me to let me know what time he would be arriving, he and his team worked efficiently and left no mess behind. The living was probably cleaner after he left, haha.

When the HDMI cable I provided for the job turned out to be faulty he used a spare cable he had in the truck…no extra change.  Much appreciated!!!!

We will definitely be calling All Star in the future and telling friends about them.

I needed to have electrical and cable outlets installed for a wall mounted TV.  When I called, Jon answered and gave me an estimate over the phone.  He sounded polite and friendly.  He was flexible and accommodating in scheduling the appointment.

Jon arrived on time.  I explained what I wanted done.  He provided his suggestions, plan, and price quote.

The result exceeded my expectation.  He did the work exactly as discussed.  He cleaned up after himself (big plus), even brought his own vacuum.

I agree with Jim in the previous review.. you seldom run into this kind of work and service these days.  Jon was professional, knowledgable and courteous.  I couldn’t be happier with his work and service.  I would definitely use him again in the future and would not think twice in recommending him to anyone.

1st one to answer the call

the electricians were very friendly and courteous. We appreciated trheir work.

Very good service, am greatly satisfied. On time for service as promised

They arrived 2 hours early on a weekend unannounced. But they did their best to match a lower bid on the job and they promptly completed the work as requested. Although they were early to the job and were not the lowest bid, they were professional, had a display panel truck, came equipped to complete the job and are licensed and insured. They did professional quality work. Good deal overall.

Erjon came right out and corrected the wiring for my ceiling fan. The price was reasonable and he is very helpful and friendly. About two weeks after the switch was installed, we had an issue with the switch not working due to a defect (not the installation). Erjon came out that day and fixed it at no charge. I would highly recommend All-star for electrical work.

He recently upgraded my electrical box from 100 amps to 200 amps. Comments: I am 110% satisfied with Erjon. He uses very good materials, gives a good price, and I don’t have to supervise him.

This company is faaaaaaantastic…
I had a tiny ittle job to replace the plastic box thaaaang (yes that’s a technical term) that is inside the ceiling that holds a light fixture in place.

I was going to buy their $95 yelp deal & John on the phone said. “Oh don’t buy that it is a small job there is no way it will cost that”

I had called another company on yelp right before hand and I knew what needed to be done, I’ve changed light fixtures many times I just could not get the old plastic box out that was cracked….

The other comapny told me & yes I’m not joking over the phone, well if the wires look old your whole house might need to be re-wired, over the phone……
I might be a woman but I’m not stupid…..

All star eelctric came out on time, they used a CLEAN drop cloth over my furniture, the two guys (Erjon and not sure of the other guy’s name) were both polite and professional and got the job done quickly and for less than most companies wanted for just the call out fee.

If I ever need electrical work again I’ll be calling them, certainly deserve the 5 stars.

Thanks all Star Electrical

I was very happy with Jon the last time, so I called him again for a few electrical work that needed to be done around our house.  Again he did not disappoint.

I’ve dealt with enough contractors in general.  He is a very rare find.
I can’t say enough good things about him.  I think he’s good at what he does, and simply a good guy all around.

I recently purchased a $150.00 coupon voucher from living social and needed an outlet installed for my dryer.  Additionally, my tenant complained of hearing sparks from her stove.  John, the electrician, was available right away.  He assessed my stove and found that the problem was not electrical (no charge) , he then installed a four prong outlet in my basement for the dryer.  Once I delivered the dryer I realized that I needed a 3 prong outlet.  I called John that evening and the next day he came and switched the cord on the dryer free of charge!   John was not only honest, professional, and quick, he gave me tips on how to fix my stove.  I think I’ve found a new go to electrician.  Also, using the voucher was easy–no hassel at all.

Thank you–John and All Star Electrical Services.  I am very happy with your services! 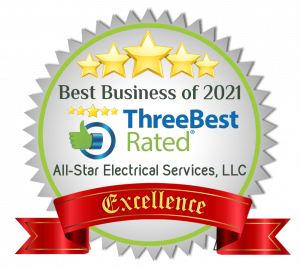